Durex: 5 Good Reasons Why You Need the World’s No.1 Brand's Thinnest Condom 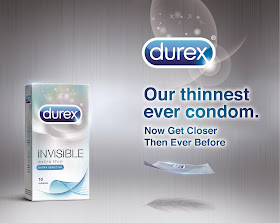 Yes, it's official, Durex release its thinnest condom. But before I go into the juicy part of why you need it... I need to share this with you.

More than 1 million people around the world contract a sexually-transmitted infections (STIs) every day.

Yes, STIs can be transmitted by one partner to another.1 If you think you might be at risk of contracting an STI, protect yourself and be safe. One of the most effective ways to reduce the risk of STIs is to practise safe sex by using condom.

Durex, the world’s No. 1 brand for condom has recently launched its thinnest ever condom without compromising the protection against STIs. With Durex Invisible, the brand has outdone itself with a strong commitment towards innovation. Designed with both partners in mind, it promises to provide the most intimate experience that soars above and beyond expectations, taking pleasure to new heights (Yay!!!).

The reason why Durex’s latest condom is to address on Malaysian consumers’ low usage of condoms and the perception that a condom decreases sensitivity during sex.

Based on the Durex Sexual Wellbeing Global Survey 2011-2012, condom penetration in Malaysia market comes in at only 5.3%, which is one of the lowest in the world.

Many Malaysians still prefer to go with traditional contraceptive techniques like the rhythm method (periodic abstinence), withdrawal, or even choose not to use any form of protection at all. Lack of knowledge and their belief in sexual myths also contribute to this problem, as seen in the 2015 Malaysian Youth Sexual and Reproductive Health (SRH) Survey. Why lah people, why?

In fact, one of the main reasons is the perception that wearing a condom decreases sensitivity during sex. However, all these only increase the risk of contracting STIs through unprotected sex.

For Malaysia, the fear of being labelled has led to 10% of young Malaysians saying that they would rather not seek medical attention even if they have been exposed to risk of STI (wow, Malaysia Boleh, SERIOUSLY?)

Hello..... this can potentially leads to a "STIs" domino effect, where somebody get infected and they in turn pass it on to somebody else. Eeeeeeuuuuuuwwwwww!!!!

As such, prevention through protected sex is always better than cure. Consistent use of condom provides substantial protection against the acquisition of many STIs, including statistically significant reduction of risk against HIV, chlamydia, gonorrhea, herpes, and syphilis.2, 3 & 4 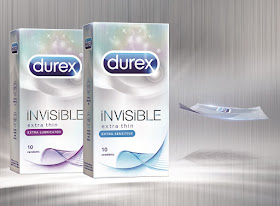 So yes.... Why you need Durex Invisible?

It's Ultra-Thin
Durex’s thinnest ever, designed for a more natural feeling to heighten sensitivity.

It's naturally soft.
As soft as the feeling of skin, so you can indulge in real pleasure.

It has amazing lubrication
With extra lube for her/his/anything in between... it's for the ultimate comfort and enjoyment. No friction, no stickiness.

It has pleasurable fitting
52mm nominal width for a closer fit and enhanced intimacy.

It has a pleasant scent
Natural woodsy scent for a more pleasurable intimate experience. No more stinky rubber smells, yucks! 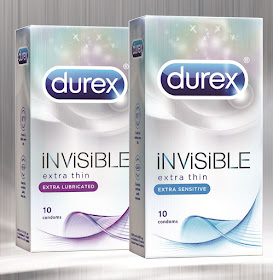 Durex Invisible is available at major pharmacies and leading online stores in two variants: Extra Sensitive which comes in packs of 3 pieces (RM14.45 per pack) and 10 pieces (RM41.95 per pack); while Extra Lubricated (10 pieces at RM41.95 per pack).

The video on.....well, Durex asking you to be responsible. But I do think this situation apply to all of us very often, don't you think?

So, wrap your asset, protect it well because when you do... you are protecting your partner(s) as well. No harm having some fun but be safe. For more information, kindly check out Durex Malaysia’s website or Facebook page.